I was introduced to the idea of a Sumatran fishing trip by a surfer friend of mine. I knew from the endless stories that it was riddled with the long, perfect waves that drew him there. Being a keen fisherman himself he had a few fishing stories from his many trips there. The lure of remote islands surrounded by warm, blue water and those fishing stories fueled the desire to travel.

I turned up for the fist time at Sozinhos surf lodge in January 2017 with high hopes for what Asu Island and the Indonesian waters held in store. By the end of the first day I knew, sunburnt, aching, slightly dehydrated and more “the one that got away” stories than I can remember. It was only the first day of my fishing trip on Asu!

Off the coast of Northern Sumatra lies the island of Nias and off Nias lies the archipelago known as Hinakos. It is made up of a chain of 8 islands of which Asu Island is the most Northerly approximately 45-minute boat trip from the port of Sirombu. The short journey from Sirombu showed promise of what was in store with the tell tale signs of flocks of sea birds feeding on some poor school of fish. It wasn’t just the one flock, at one time I counted 4 separate feeding frenzies taking place and it was around this time that I began to loose all control of my British reserve and my use of the queens English and realised what this fishing trip was going to be all about. Wildly pointing at anything that moved, each feeding flock of birds was pointed out excitedly to my friend as if it were the first that he had seen, sunnies falling of my head. I felt like Captain Ahab staring out over the water as we sped along as opposed to the Mr Bean as I was more than likely viewed as.

Now I don’t claim to be the world’s best fisherman by any stretch but I am ok. I have spent a lot of time fishing offshore West Africa, a trip to Mozambique, a bit in the UK and Western Canada so I would say that I am proficient enough. This turned out to be a fishing trip unlike any other that I have been on. Giant Trevally, barracuda, blue fin trevally, Job fish, massive Gar fish and all of this from the beach! Light spinning tackle, a pair of trainers for the rocky parts of the island, water and that was it. Adrenaline did the rest and carried me through easily until I returned to Sozinhos at the end of that first day where young Bea prepped and cooked my fish for supper that night and laughed at my sunburnt skin and broken body. He has seen the same thing countless times with guests all being transfixed by the place and fishing. It was a magical end to a fantastic first day, a first day that runs through my mind on days like this. Days where the spirit of freedom and adventure seem a long way from what the reality of life is. I can recall every strike, every fouled hook, every soaking by a wave and of course, every fish that got away!

Sozinhos surf lodge on Asu Island, a fishing trip of a lifetime awaits you there. 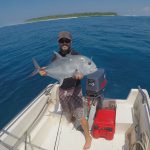