It’s still dark with just the faintest hint of the fast approaching sunrise as the fishing gear is passed onto the Sozinhos speed boat. We step aboard, place the rods in the holders and stow the bags under the sun screen. What lays in store for us is some of the most exhilarating fishing that can be found in these blessed Indonesian waters.

Sozinhos Surf Lodge is located on the island of Asu which is the most northerly of the 8 islands that make up the archipelago known as Hinako. Found just offshore from the main island of Nias, Asu and the Hinakos are a fishing paradise. This is a often used phrase but no better word to describe it. Looking out from Sozinhos is looking out into the vast expanse of the Indian Ocean. Line after line of empty surf with the next stop being Mozambique. Between us both is fish, a lot of fish. All of the waters surrounding the Hinakos are as pure and untouched as you could ever possibly wish them to be. Crystal clear with beautiful, pristine coral on display before that gradually or sometimes dramatically disappears into the deeper, darker waters.

The new Yamaha engine propells us gently through the glassy calm waters of the sheltered mooring site. The throttle is gradually opened up and we speed around to the other side of Asu. Here you can feel the lines of swell as the boat gently rises and falls moving us ever onwards. Darryn who is knows these waters so well positions the boat perfectly just behind the rolling surf and offers advice as required. This was my first time fishing from the boat. It was also my first experience casting in front of the breaking surf from the backline. Initially I was like a newborn calf with my legs skipping around everywhere bracing against the pitching boat but after a bit of time the balance came naturally. By learning to maintain a more fluid stance I eventually didn’t even notice the movement.

The first few casts brought nothing. Darryn repositioned the boat directly opposite from Sozinhos and then it was game on. “I’m on” as the first of umpteen Trevallys took the lure for that couple of hours. Light tackle and gear made it brilliant fun with reels screaming and our rods bending. Every pull and head shake was mirrored with the bending of the road. For every one that we caught and released, several more came off. Once the action stopped on plugs we changed it up for poppers. First cast nothing followed by the second and then the third, BOOM huge surface strike with water splashing everywhere. The sight of a big tail turning in chase. My first GT on my first morning on the boat, awesome, awesome, awesome.

Fishing Asu and the waters around the Hinakos with Sozinhos surf lodge was something magical and for me something that I cannot wait to get back to. 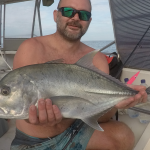 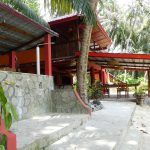